Hexes Chess was created by U.S. designer Mike Layfield. The idea of hexagonal chess occurred to him in 1992 during a game of chess with a friend. Soon afterward, he built and tested his first prototypes. After nearly a decade of experimentation and game testing, Layfield settled on a chess-board design comprised of 54 hexagons and accommodating two sets of 15 chess pieces. In 2003 Hexes Games was born and 1000 copies of Hexes Chess were manufactured. Over the next decade, an alternative set-up and castling rule was added to the game sets on a printed card.

Chess is an Idea

Chess is a simulation of team-vs-team conflict—a strategy board game for two players, each commanding identical forces comprised of a team of specialialized chess pieces: the king; the queen; the rook; the knight; the bishop; and the pawn. Each piece with its particular powers of movement is a narrowly focussed specialist in need of leadership. The player provides that leadership by coordinating the various pieces in the pursuit of victory.


A Brief History of Chess

The game of chess has its origins in the Arabian game of Shatranj in the 7th century, which was itself derived from an earlier (600 A.D.) Indian game called Chaturanga, a sanskrit name which means divided into four parts. As the game replicated to other cultures, it evolved into several local variants. Over the course of the last 1400 years, the game has undergone several mutations, evolving into Xiangqi in China, Shogi in Japan and into Chess in the West. All of these are played on a square board composed of smaller squares.

The first documented hexagonal chess game was designed in 1936 by Vladyslaw Glinski of Poland. His game board is in the shape a large hexagon composed of 91 smaller hexagons in three colors. He added one bishop and one pawn to the conventional chess set. 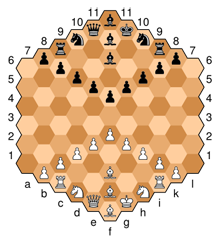