Function is a property of form.

Can hexagonal chess be squared? The answer is yes, but first you have to squeeze the hexagons! Hexes Chess 9-Pawn was first designed with ordinary hexagons in eight ranks by nine files. The extra file was inserted into the middle of the conventional 8x8 board design to accommodate the extra bishop and pawn. The resulting chess board was a rhomboid in shape, and too cumbersome to play on (see below).


But when it was squeezed (skewed) into a square shape, it looked remarkably like a conventional square chess board! But don't let that fool you—Hexes Chess 9-Pawn is fully hexagonal. While the other Hexes Chess games are designed to have fewer spaces and pieces than square chess, Hexes 9-Pawn has more spaces and pieces. It is a full-size chess game, so pawns may move two hexes on their first move, and the en passant rule applies. The player begins the game with a jaw-dropping 55 possible opening moves, compared with 20 for conventional square chess.

This game's idiosyncrasy is its squeezed hexagons, which makes learning the game a bit harder. If you are new to hexagonal chess, you might want to learn with one of the other Hexes Chess 2-player games before attempting 9-Pawn. 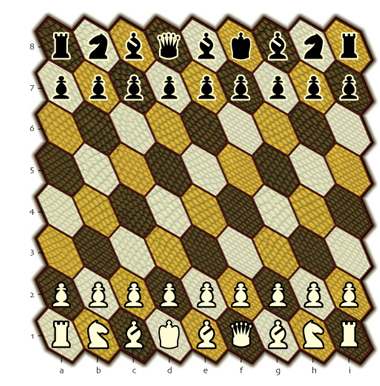