"The more perfect a nature is, the fewer means it requires for its operation."
—Aristotle, 4th century BCE

Simply put, Hexes Chess 3-Pawn is the most parsimonious, full-complement chess game on the planet. Weighing in at a mere twenty-four chess pieces on thirty hexagons, this insanely simple design facilitates a surprisingly rich chess experience. It plays faster than more complicated chess games, but is less forgiving of mistakes. Hexes Chess 3-Pawn is a compressed chess game. The pawns do not get two-hex opening moves, and consequently there is no en passant rule. Hexes Chess 3-Pawn has a couple of idiosyncrasies. The first is its odd shape. Chess boards are organized by rank and file (row and column). The 3-pawn chess board has three files (columns), but they bend 60° at the third and eighth ranks. Playing Hexes Chess 3-Pawn is like waging a battle in a gorge between steep rocky walls. The second idiosyncrasy is that due to the chess-board's narrow shape, a king and knight can accomplish checkmate without help from other pieces. 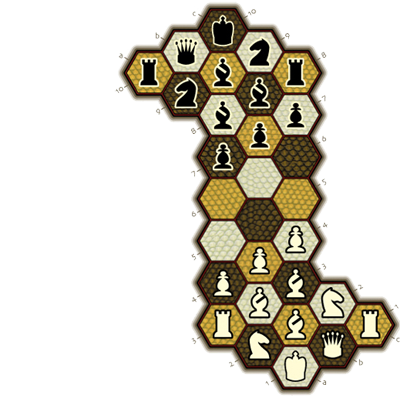